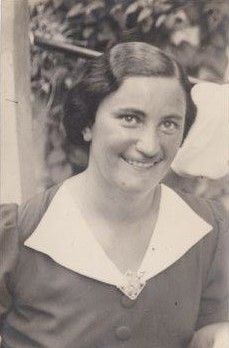 Courtesy
Courtesy of Jacoov Schreiber
Hebrew-Name
לינה קורן שרייבר
Biography
Lina Schreiber (née Korn, later Hurwitz) was born on 7.9.1907 in Rozwadow, Poland and died on 27.6.1974 in Haifa. Her family emigrated in 1907 to Hannover and later moved to Berlin. Between 1924 and 1930 Lina worked as kindergarten carer, and between 1930 and 1931 she trained as a children's nurse. Between 1931 and 1932 she studied at the school for social work in Berlin and between 1933 and 1938 she worked for the Jewish community in Berlin (Jewish welfare and youth welfare office). She also worked with Hilde Hochwald at the Zentralwohlfahrtsstelle der Juden (Central Welfare Bureau for Jews in Germany, ZWST) in Berlin. The family emigrated to Palestine in December 1938, and Lina worked again with Hilde Hochwald, this time in the Haifa welfare department. Lina was married in Berlin to Israel Schreiber, who died in Haifa on 6.1.1963, and they had one son, born in 1943 in Haifa.
Marriage/Children
Lina was married to Elieser Schreiber. They had a son.
Age at Migration
31
Year of Migration
1938
Chronics
Lina's activities in Berlin (1924-1938)
Lina's activities in Haifa (1938-?)
Domiciles
Berlin (?-1938)
Hannover, Germany (1907-?)
Haifa (1938-?)
Networks
Schächter, Regina
Hochwald Katz, Hilde (née Hochwald)
Archival Materials
Archives: Alice-Salomon-Archives; Central Zionist Archives, Jerusalem (CZA J1\12633); State Office for Residents' and Regulatory Affairs, Berlin